The UK has a vibrant engineering sector, but there is a notable shortage in those possessing STEM skills. Experts want to introduce these knowledge bases at primary school level to help address this issue, as it will only be exacerbated post-Brexit. The UK is hoping to grow its space industry by a proposed £40 billion by 2030, which means it is more important than ever for pupils to be trained in STEM subjects. At the moment, there are currently around 3,000 physicists graduating each year across Britain.

The UK is considered to be a research nation, and is home to four of the top 10 universities globally, as well as 29 of the top 200. Demand for engineers in coming years is thought to be worth an additional £27 billion towards the UK economy each year from 2022. The impact of £1 being produced in engineering means £1.45 is being generated elsewhere.

‘Engineering the Future’ will be released in 2019. If your organisation would like to contribute or feature in the programme, please contact Alan Mason by email at alan.mason@infocusbroadcasting.com 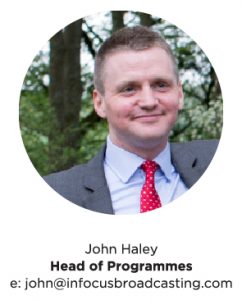 John is a media executive with experience spanning nearly 20 years. With a background in both business and consumer press publications and online platforms, he has held positions from Head of Sales to Group Publisher covering sports, business and legal magazines, journals and websites. With a keen interest in news and current affairs, he has worked for national broadcaster ITN (producers of ITV news, C4 news and Channel 5 news) as Programme Director (permanent staff and freelance) creating specialist industry news programmes in the banking & financial services, healthcare and tourism & hospitality sectors. 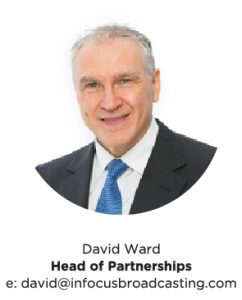 David is a solicitor and has been involved at director level in commerce for over 20 years, with a particular interest in media. As previous publisher of market leading titles, he has vast experience creating exceptionally high quality products and platforms, and delivering news and content to the exacting needs of his audience when they want and need it. In his spare time, he enjoys going to the gym, stamp collecting, collecting old letters from prime ministers and flying, he is a holder of a commercial pilot’s licence.